The Social Corporation for Community Advisory and Training Services (COS-PACC) is principally dedicated to providing attention and accompaniment to victims due to the high numbers of human rights abuses in the regions where it works, especially in the departments of Tolima, Boyaca, Casanare and the city of Bogota. It does so while remaining focused on its principal objective, which is reconstructing social fabric and providing on-going training to promote and defend human rights and international humanitarian law.

At the end of the 1990s, the small scale farmers’ movement which had come together as the Asociación Departamental de Usuarios Campesinos de Casanare (ADUC) was exterminated by the military, by State security forces and by paramilitary groups[1]. In 2002, some of the surviving members created the organisation COS-PACC, after debating the need to rebuild the region’s social organisations and in the face of systematic human rights abuses in the foothills and plains of the departments of Boyaca and Casanare.

COS-PACC develops activities in regions where both the environmental and social situations are extremely precarious. It accompanies and gives legal advice to the victims of human rights violations. In coordination with the Foundation Committee in Solidarity with Political Prisoners (FCSPP) and Corporación Claretiana Normán Pérez Bello, it also documents and brings claims for environmental harm, human rights abuses and violations of international humanitarian law and crimes against humanity, in particular for extrajudicial executions and enforced disappearances. The organisations jointly submit disciplinary complaints, civil litigation and criminal litigation, including the claim against the Army’s 16th Brigade for several cases of extrajudicial executions in Casanare department[2].

In order to inform and raise awareness about these human rights violations, a very important part of COS-PACC’s work is publishing reports, research and video documentaries, which they produce about the context and the communities where they work.

The arrival of multinational corporations in the 1980s, particularly oil companies[4], in Casanare, Tolima and Boyaca (the regions where COS-PACC currently works) has had a strong negative impact on communities in terms of environmental damage and social degradation, due to systematic violations of their rights.

COS-PACC carries out most of its work in this region, where it accompanies organisational processes from almost all sectors of the population and has established a human rights team in order to maintain a stronger presence on the ground. The field team includes delegates from the farming sector through the Asociación Nacional Campesina Jose Antonio Galan Zorro, the Organización Regional Indígena de Casanare (ORIC) and the young student sector grouped in the Asociación Casanareña de Jovenes y Estudiantes (AJOCARE) who are developing a programme in coordination with the Fundación Jurídica Javier Barriga Verger (FUNJAB).

In 2014, a public hearing was held in municipality of Trinidad (Casanare), called by politicians, community organisations and human rights defenders, and coordinated by COS-PACC, on the issue of “The environmental and human rights impacts of energy and mining policy in the foothills and plains”. In the words of Fabian Laverde, member of COS-PACC, it is “an important and unprecedented space for the communities of Casanare, who have submitted claims for the crimes which they consider themselves to be the victims of, and who are part of organisational processes.”

It was also a forum for highlighting the State’s direct responsibility as the entity which enables or absolves the oil companies’ responsibilities. The communities’ claims were taken before Congress[5] which followed up on them and at the end of 2015 held a debate on the mining and energy sector’s security policy in which Senator Ivan Cepeda Castro denounced the existence of agreements between military units and mining, fossil fuel and hydro-electric companies; “Agreements which have the highest number of cases of extrajudicial executions”, according to the Senator[6].

COS-PACC’s research on the environmental damage caused by some multinational companies has created tension and opposition to the organisation from companies and public entities[7].

Profile: Who is Fabian Laverde?

The ‘Daniel Abril Fuentes’ School of Environmental and Community Research

Led by COS-PACC, the ‘Daniel Abril Fuentes’ School of Environmental and Community Research was inaugurated in April 2015 in tribute to Daniel Abril Fuentes, a small scale farmer, environmentalist and community leader who worked with COS-PACC for many years in rebuilding the social fabric, and organising and drafting claims. Daniel Abril Fuentes was assassinated in November 2015[8] during the farmers’ demonstrations in Casanare.

Stories from the field: To the rythm of llanera music

It is a forum for resilience and a meeting place for community leaders, organisations and processes in rural and urban areas in the region, particularly Casanare department, who have suffered from the exploitation of energy and mining resources and State crimes, and who struggle to protect natural resources, food sovereignty and their methods of production. The school empowers leaders to build alternatives for sovereignty, dignity and wellbeing. 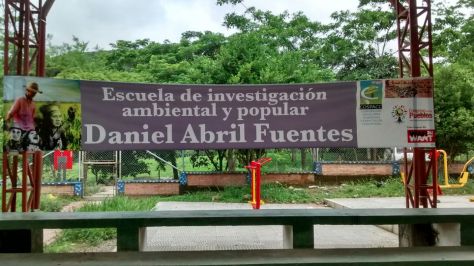 “COS-PACC’s work in training farmers in Casanare on human rights issues is very important, because it equips them with tools to denounce the human rights violations they suffer, on many occasions because of economic interests. COS-PACC also does research and brings claims in the region on environmental issues like pollution and drought”. Ninfa Cruz, a member of COS-PACC.

The U’wa indigenous reserve: a milestone in organisational strengthening

COS-PACC accompanied the indigenous U’wa community from Chaparral Barronegro reservation during its structural and organisational processes and in defending its lands from the implementation of economic projects in the region. The reserve is in north of Casanare and was created in 1986, it has a population of 500 inhabitants and extends over 16,824 hectares.

In photographs: Journey to the U’wa world 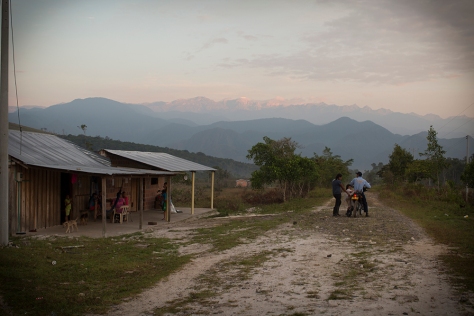 According to COS-PACC, one of the most important achievements of their work in the reserve is to limit the militarisation by the Army and Airforce, and resist incursions by oil companies on the community’s territory[9]. This work also led to CO-PACC and ORIC coordinating their efforts.

COS-PACC’s work in coordination with other organisations, including the Foundation Committee in Solidarity with Political Prisoners (FCSPP, also accompanied by PBI), have borne results. For the first time in history, a high ranking officer of the Army will be put on trial for his alleged responsibility in several extrajudicial executions. The Public Prosecutor’s Office has charged General (r) henry William Torres Escalante for being the intellectual author of the murder of farmers Daniel Torres Arciniegas and Roque Julio Torres, who were father and son[10], and grassroot members of COS-PACC from the municipality of Aguazul. Read more

In Tolima department, COS-PACC accompanies the Asociación Campesina Agroambiental de Colombia (ASACOL)[11] and other processes that are part of the Peoples’ Congress, regarding human rights issues, especially in documenting cases, reconstructing the historical memory of the victims of State crimes and raising awareness about them.

COS-PACC’s purpose in the regions, as well as organising victims, accompanying them during training processes and if they bring claims, is to raise awareness about them, through memory workshops and days which they undertake on a periodic basis in the territories. We highlight just some of these initiatives:

Stories from the field: An act of collective memory

Due to COS-PACC’s activities, its members have been subjected to detention, persecution, surveillance, threats and robberies, which have been duly reported to the authorities and been the subject of claims brought against the Security Forces in Casanare for abuse of authority, illegal gathering of personal information, arbitrary detention and information theft[17]. In 2003, COS-PACC’s founder, Francisco Cortes Aguilar, was arrested and imprisoned in Bolivia, accused of rebellion[18]. He was released two years later after a massive campaign in which the United Nations qualified his detention as arbitrary[19], and in 2014 he was found dead in suspicious circumstances. In 2005, soldiers from the Army’s 16th Brigade arbitrarily detained two of COS-PACC’s members in El Morro, in the municipality of Yopal , when they were carrying out a study on the environmental impact of the oil exploitation[20].

COS-PACC is also the target of smear campaigns and media attacks by the security forces and both civilian and religious authorities. It has also denounced attacks against the processes it works with in the regions.

See further information on the most serious incidents against COS-PACC in 2016.

From 2006 to 2010, COS-PACC had temporary measures of protection from the Interior Ministry , which consisted of communications equipment. When the National Protection Unit (UNP) was created, the organisation decided to give up the measures over fears that they would be subjected to wiretapping, due to the UNP’s staff having formerly been part of the disbanded Department of Administrative Security (DAS), notoriously involved in illegal wiretapping scandals[21].

In 2014, COS-PACC was a finalist for the Antonio Nariño Franco-German Human Rights Award, and the following year the organisation received the Diakonia National Award for the Defence of Human Rights in Colombia in the category “Collective experience or process of the year, NGO level”.

PBI has accompanied COS-PACC since 2009.

“To us, international accompaniment means solidarity, it means protection, it also means a guarantee that we can remain in the regions, [and] it means trust. No-one tells their life story to, or invites someone they don´t know into their home. But with PBI a relationship exists where we don’t take these precautions when there is a change in PBI volunteers, the trust between PBI and COS-PACC is established and the trust between the volunteer and us [COS-PACC] is enduring, and things have gone well for us with PBI. It is about sharing, about trust, about building something together”. Fabian Laverde[22]

Peace Brigades International (PBI) has carried out observation and international accompaniment in thirteen countries on five continents since 1981 and in Colombia since 1994.